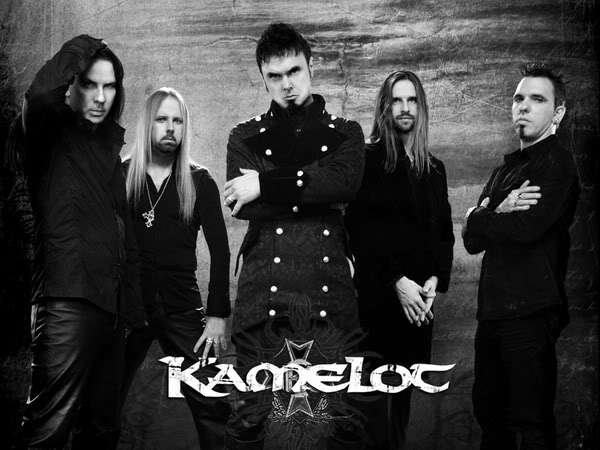 ( I went to this show last year and finally am getting the review up…sorry it took so long!!)

One thing that I will never understand is why we dont get any killer Prog/Power Metal bands in Vegas. It sucks that I have to travel to another state to see some of the most incredible and extremely talented Prog and Power Metal bands from all over the world! Every time there is a tour they pass Vegas by. They hit Phoenix, LA or SF and then,whoa, what happened to Vegas?? We were lucky one time and got Iced Earth. They sold 300 tix at the HOB, but I tell ya they were the most rabid metal fans you could ever see! And we actually got Nightwish last year to a count of like 900 in attendance. Not bad for Vegas!!

So when I saw that two of my fave Prog/Power bands, Edguy and Kamelot were going to be doing a tour together, I was ablazed with enthusiasm!! But then I saw what I was afraid of, no Vegas date…great, again I would have to take time off work and fly to LA or SF to go see two of my heroic bands. So guess what? I said fuck it and managed to get three days off, a round trip ticket from Vegas to Frisco and Frisco to LA and had two great friends to stay with in both towns. I was like, “I might as well see them twice!!”It was an ingenious plan!! It wasnt too expensive and so I booked my flights!!

My first stop was in Frisco to stay with my friend Bear who promoted BAR-Fest last year and go to SLIM’s to see these two amazing bands! SLIM’s is a small club that holds maybe 6-800 people and it is a bitch to see any bands unless you are right up front. I saw Symphony X and Epica there earlier last year and was lucky enough to be in the tiny photo-pit so that I could watch the show without getting crushed. It was amazing having Russell Allen sweating above me and making faces at me all nite!! Lol!!

Bear and I in Frisco!!

So we get there to a packed house and its already totally fucked to get up front but me and Squeak(The other killer Photog in ‘da house) manage. Dirk from EDGUY totally hooked me up with a photo pass so I was stoked to be shooting off the cuff!

I have never seen either of these bands and I am so excited I can barely see straight! So we get into position in the tiny pit and out come the always enthusiastic and bombastic EDGUY!!! I hear a lot of shit about these guys and I am telling you, they have so much unbridled energy that it permeates from their pores! They live this shit!! They Breath it!! They ROCK IT!! They brought it on and in a big way!!! They started with one of my all time fave rockers “Mysteria” and everyone was bouncing with glee but when we thought it couldnt get any better, they busted out “Sacrifice” which is also another tune that I always turn people onto when I tell them about EDGUY! Its just shreds and is a roller-coaster ride of a song!!! They kick out the crazy “Lavatory Love Machine” and I just crack up! We have to get out of the pit after the third song and right away we are crushed… now we gotta try and find a spot to stand where we can see because we are two short-ass photo girls and we cant see shite!Tobias Sammet is the always silly and adorable front-man that is a seriously talented singer and songwriter! (check out Avantasia!!) He gets the crowd all riled up and crazy and even gets people heckling him, but the ever grinning front-man isnt fazed and just keeps on joking and cutting up like a stand up comedian…”German’s arnt suppsosed to be funny” Tobi tells me in a short interview at WOA in Germany in 07, but this dude is really funny!! He just cant seem to help it! 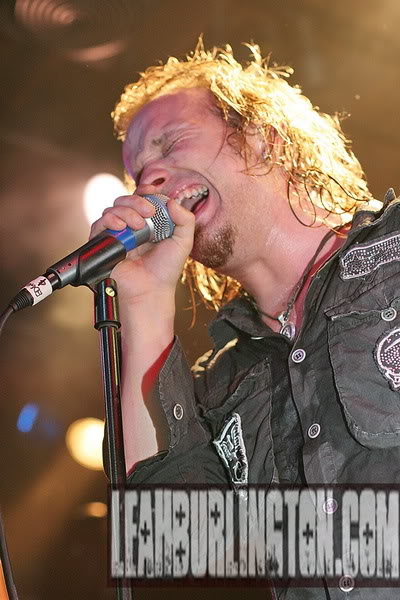 After a sweet rendition of “Mandrake” he shows his vocal talents in the song “Superheros”. This is really a cool song, I dont care what you say! They do an older song called “Vain Glory Opera” from the CD of the same name and show how talented they truely are and how they used to be a total power metal band!! Tobi plays with the audience more and then ends the set with”King of Fools”. I really enjoyed the set and was sad that they were over but then remembered that I would see them again the next nite! 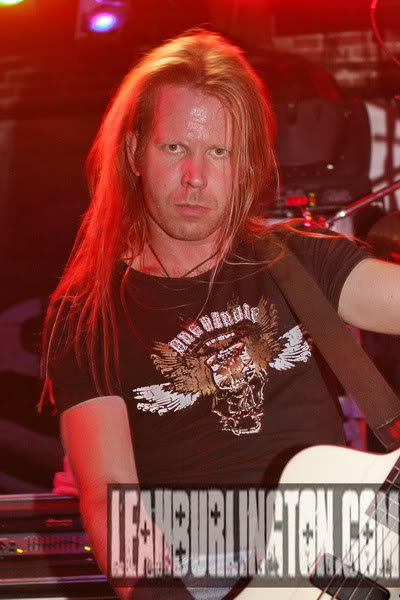 After a short break the lights get all low and red and there is a ton of smoke and we were in for a real treat of metal godliness… Kamelot was about to hit the stage and bring the fury that is true a Prog/Power/Symphonic Metal band!!!! The intro of ” Rule the World” comes on and out come the talented musicians themselves. Roy is all regailed in a black robe with buckles and belts and looks dark and ominous! 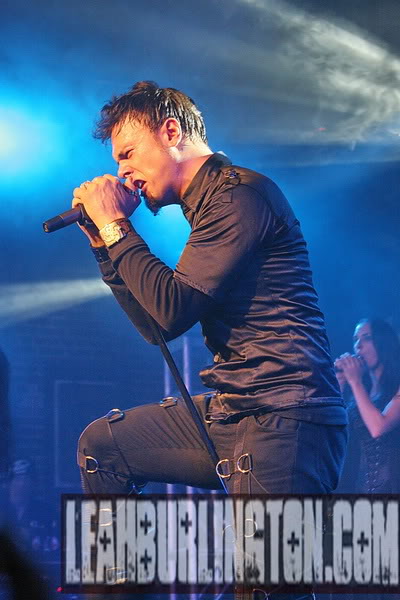 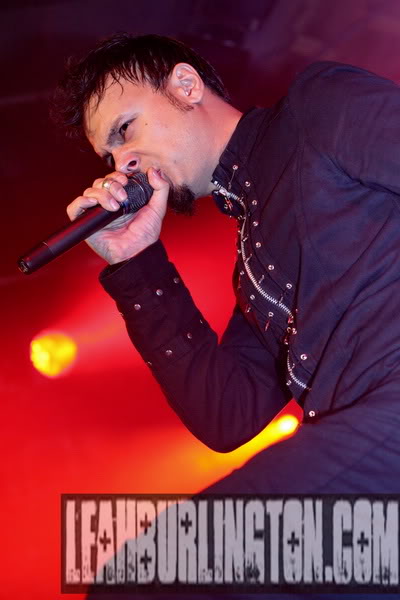 These guys are the more serious of the two and show how to put on a seriously beautiful spectacle!!! Thomas Youngblood was all over the stage and flaunting his prowess on the guitar and of course Casey Grillo was a master on the drums and you had to wonder how the hell he playes so fast and tastefully!! 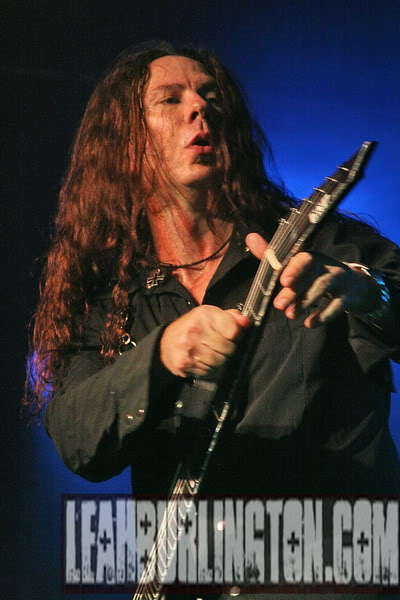 This band is one of the best out there in their genre and I am so happy and blessed to be shooting the show again in the tiny pit. I am blown away by the way Roy Khan takes control of his audience and the man has such a stage presence that brings you into his world of wonderous songs. He has an amazing voice and I know that he had a cold or something due to a quote he said later about being sorry about sneezing onto a fan up front…lol! If he was sick and not at his best, he could have fooled me and did, because he was mind blowing to me. They put on a show that was intense and there was an energy in the air that was felt by all. It was Oct and we were all sweating in this small club as Kamelot rocked our asses off with songs like,”When the Lights are Down”, “Soul Society”, “The Pendulous Fall”,”Center of the Universe”, and then my all time fave song “Abandoned”. That song always makes me want to weep. When Oliver Palotai started the intro to that on the keys I almost fell down. It was heavenly!

Oliver rippin’ up the keys!!

They then played out the rest of the set with, “Descent of the Archangel” “The Human Stain”, a duet with their female singer who’s name I dont know, with ” The Haunting”After that it was “Edenecho” and “Forever”. They go off the stage as we all cry NO! and then come out to pummel us with encores , “Ghost Opera”,”Epilogue”,”Karma” and then the always ominous and creepy “March of Mephisto” to end the set! I was spent, I was satisfied, I was happy! What a fuckin’ great show!!!!

The next day I get on a plane to Hollywood and do it all over again…I gotta tell ya the show was exactly the same the next nite except for the venue was the famous Key Club in Hollywood and it was a lot bigger and the stage was better and so was the crowd! We ate at the Rainbow Bar and Grill before and had the famous pizza they have there and met up with some old friends. We hit the club and I get another photo pass thanks to Taz the TM. I didnt it need though, there wasnt a photo pit and I already had killer photos from SF anyway. I just enjoyed the show and the company I was with. EDGUYwas a blast again and kicked so much ass and I was able to jump around and go a bit crazier this time. Then Kamelot was on fire again and Roy seemed
to be feeling better. The energy was palapable and we just felt it in the air. It was another hot and sweaty show and everyone was having the time of their lives,including me! They both put on fantastic sets and I was again satiated but totally exhausted. 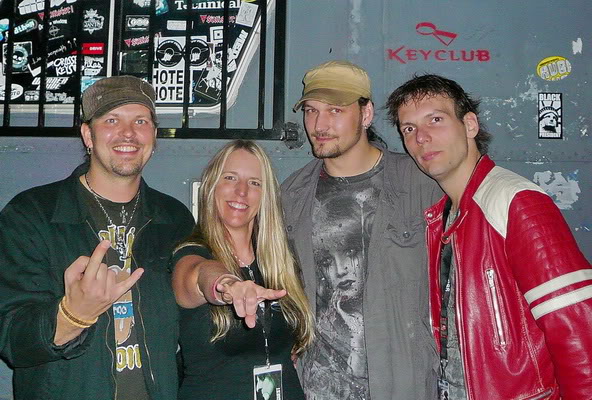 Hangin with EDGUY after the show….Dirk,Jens and Felix!! 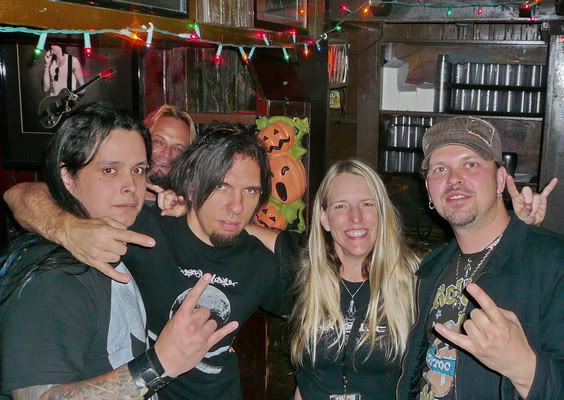 Bill Hudson,Casey Grillo, me and Dirk at the Rainbow…. 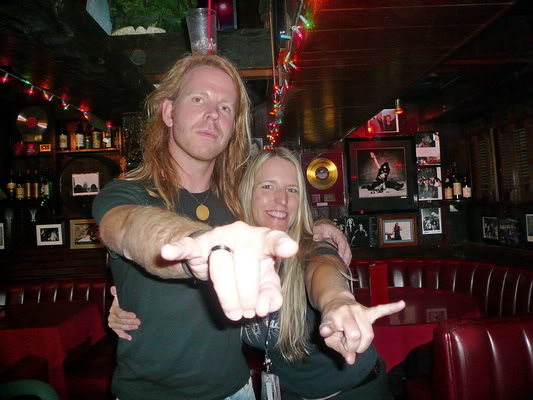 Rockin the horns up with Lemmy at the Rainbow after the show!

I am so glad I hit both shows because both bands are just so amazing and they are great guys that deserve so much more fame and recognition!! I had a killer time and would totally do that again if they come through my area. Maybe one day Vegas will wake up and listen to something new and fresh and finally realize there is more out there then Hair Metal……