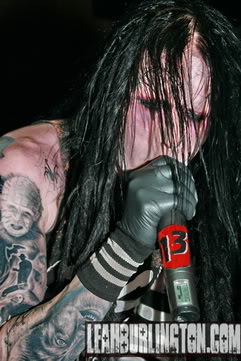 When my friend Diane drug my ass all the way outta bed on a sunday nite to go to the ROX to see WEDNESDAY 13, I wasnt expecting too much because I had never heard him,or so I thought…I get there to find out(because I had no clue) that Wednesday 13 was the singer of the Murder Dolls,whom I fucking love!! They were only out for a cd and they went fast, but that cd ROCKED!!
Wednesday reminded me of Manson/Rob Zombie with a Hollywood Sleaze twist. He had really long dreadlocks and was all decked out in kick-ass clothes. 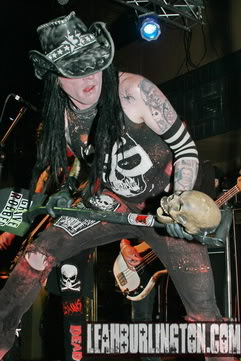 When these guys came out it was super chaotic and frenzied! They played songs off his new Cd Fang Bang and also Transylvania 90210. His old Murder Dolls bandmate Acey Spade was there beside Wednsday just pumping out the licks. 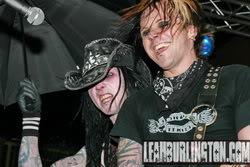 His band consists of Johnny Chops on Drums,Nate Manor on Bass and J-Sin on Guitars. They played an array of Wednsday 13 songs along with some Murder Doll faves like 197666, Die my Bride,and Dead in Hollywood. They did new stuff like Rambo and FUCK.  He used a few props that were really kewl…

Unfortunatley for the band the crowd was small…I dont know if it was just because it was a sunday or that I never saw it advertised,but I felt bad that hardly anyone was there but the band still gave it their all and rawked the ROX down!! I was so happy that Diane made me get outta bed to see these guys live,because I would have regretted not seeing them. Wednesday 13 just RULEZ!!!  You can find Wednesday 13 at Myspace at: http://www.myspace.com/officialwednesday13 I give this show \m/\m/\m/\m/\m/ WAY up!!!!! He is amazing!!