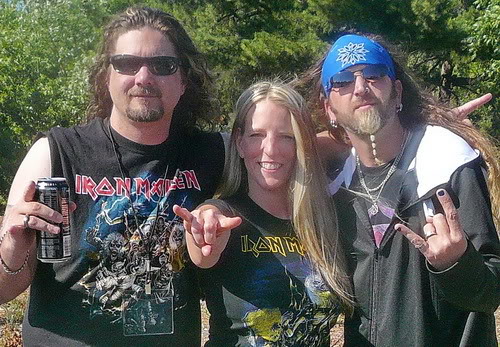 One of my fave old-school metal bands that are still alive, kicking , and thriving are Iron Maiden. They, to this day continue to put out quality cd’s and do live shows that are second to none. For a metal band to be around for more than 30 years, Iron Maiden has set the standards and inspired many bands that are out today. Not many bands can say they have been to the places they have,done the extensive tours, or have a loyal fan base that they have. Maiden is just well…Maiden. Everyone knows who they are, knows at least one song by them and has at least seen them once. They have a legion of fans that are as rabid and loyal as you can get. I saw that first hand tonight at the Concord Pavillion in Concord Cali, across the bay from Frisco. I had to travel to Cali to see these guys because for some odd reason, they wont play Vegas anymore. The last time they did was the brave New World tour which we saw in Phoenix and Vegas at the Aladdin the night I first met Jon Schaffer of Iced Earth and Lonn Friend from RIP magazine fame. Both guys I can now proudly call friends. That was an amazing show with Queensryche and Halford on tour with them. Three of my fave singers on one stage. God that was like 8 years ago in 2000!!! We got to hang out with so many cool people up in the bar after the show including Adrian Smith,Dave Murray (who was doing a bunch of shots) and Janick Gers. There also was Dimebag Darell in the audience and Blackie Lawless even put in a apperance upstairs. That was one of the most awesome nights of my life! 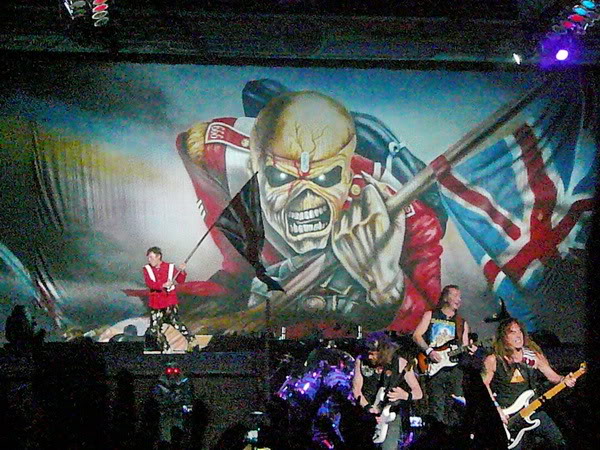 So, I came up to Concord to hang with my friend Christian his bud Mitch Stewart from Circle 11 Circle and Greg with his sons Phil and Shon. We all had pit tix thanks to Greg and we all took off and drove a whole maybe 5 minutes and got out and walked through a few hills to get to the pavillion that rests on a gorgeous hill. It was a beautiful sunny day with a slight breeze and we were all in great spirits. A myspace friend of mine, Dawn , recognized me and came up to me and said hi ,and we chatted and laughed while we waited to get in. She is a sweet girl that knows her metal just like me! So we get in and grab some drinks and go down to the floor and it was sparse at first with no problem seeing the opening band which was Steve Harris’ daughters’ band Lauren Harris. Well I wasn’t impressed at all and neither was the crowd. We just wanted to see the mighty Maiden perform! Her form of “pop” metal just wasn’t on the minds of this crazy crowd..
So, Christian and I settled in the crowd about 8 people from the barricade and waited for the lights to go down…the crowd was electric and intensly waiting the first chords to start. Then the lights went out and they started the music for “Doctor,Doctor” and the crowd was just waiting, waiting for it to come….then BOOM up go the lights and the backdrop and you see the Powerslave/Seventh Son/ Somewhere in Time backdrop come up and the crowd went absolutly insane!! I am not kidding the roar was deafening!! The PUSH was devastating!!! They pushed us at least ten feet forward and I just knew as I was being crushed there were people up front being totally crushed. There were kids up there…not a good idea parents. Not at a Maiden show. I am from Vegas where most metal-heads are pretty docile, so I never experienced that in my town. But we also don’t have many venues with general admission that are THAT big! It was fucking scary as hell and when they started pushing again it was time we got the fuck outta’ there! Christian took my hand and we got out as soon as we could because that was just not cool.

Hey people out there that do that pushing shit: You are an asshole!! There were kids in there. People were getting hurt!! There is NO reason to push like that. I heard there was a kid up against the barricade that had blood coming out of his mouth. So stop that shit!! So there…

The First song was “Aces High” and then shot straight into the sick-ass “2 Minutes to Midnight” After that they threw in “The Trooper” with Bruce Dickenson waving the Brittish flag and wearing a red uniform. He was in “top” shape and was running all over the stage like a 20 year old! That was about the time we got out and had to take a piss break and when we came back we walked down by the sound board and jumped in front of it in the VIP area due to Christian seeing Chuck Billy from Testament and him giving us the “ok” to jump up there. It was a sweet spot with perfect sight of the stage and the sound was pristine from there! They slammed into “Wasted years”, one of my all time fave’s and then down went the lights and they burned red for “The Number of the Beast!” They had this devil guy come up on the side of the stage and all these flames spouting up from under it! It was sick as hell!
Then another backdrop change and “Can I play with Madness” came on strong and then the lights went low and blue and the backdrop became a ship and we knew we were in for “Rime of the Ancient Mariner”. I don’t remember ever hearing this live but it was so beautifully done and Bruce again donned another costume and blew us away with his stellar performance.

Then another backdrop change with the egyptian theme from the cd ,”Powerslave” and of course thats what they played!! Thats when Bruce put on this feathered face mask and with a large sweep of his arms beckoned us to throw our hands into the air! Then came “Heaven CanWait” from the killer cd “Somewhere in Time”, and as they always do, they bring out the backstage VIP’s and they all sing the Ooh, ooh ,ooh’s. Thats a given at a Maiden show. Oh, to be one of those guys,huh? 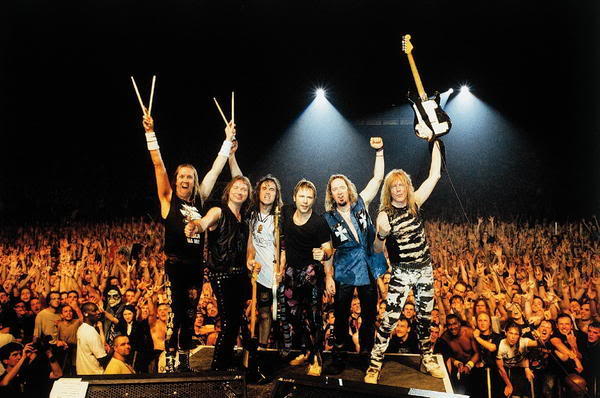 Then the thunderous bass pounding fury that comes from the remarkable and almost never imitated, Steve Harris started and we were in for the rollicking “Run to the Hills!!”That is always a huge crowd pleaser and the fans screamed the chorus!! The lights went dim for “Fear of the Dark” and then we were in for a real treat when the egyptian theme came up and a HUGE mummied Eddie came up from behind the stage with an eruption of fireworks and the familiar guitar harmoies of “Iron Maiden” screamed from Dave Murray, Adrian Smith and Janik Gers guitars all in synch! That was a blast from the past!!
They went off stage for a moment and came out with three encore songs, “Moonchild”, One of my Faves “Clairvoyant” and one of, in my own opinion, their coolest songs ever.”Hallowed be Thy Name” ended the show with a serious BANG!! Explosions and fireworks ended the show as the band of “Blood Brothers” came out to the front of the stage to throw out the coveted signature wristbands,drumsticks and guitar picks to the lucky fans who probably about killed each other for them.

This for sure, was one of the most amazing concerts I have ever been to…maybe it was the good company, or the spot we got, but I am sure it was because it was the impeccable, IRON MAIDEN who never ceases to please their adoring fans!!!

As an afterthought I thought I would put up some photos I scanned that I shot in 2000 on the Brave New World tour in Phoenix and Vegas!!! These were 35 mill film mind you so they are grainy after scanning them, but I still think they were cool-ass shots!! We were CLOSE at both shows!!! 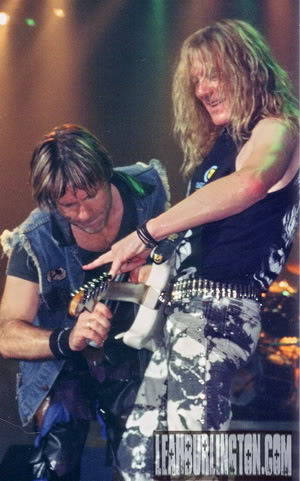 Bruce and Janick cutting up!!! 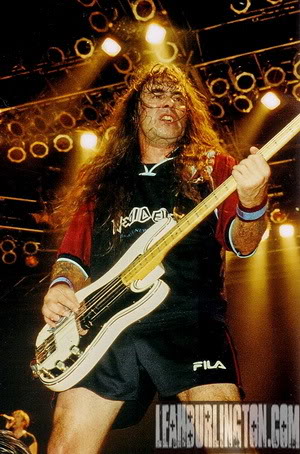 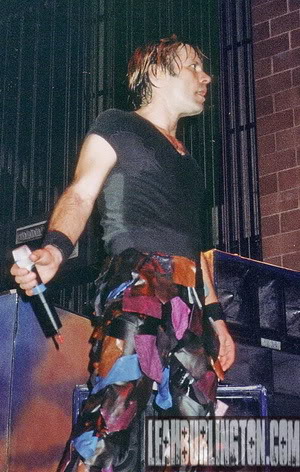 For all that is Maiden go here: