One of my fave new bands on the Power/Progressive/Symphonic level is Nightwish from Finland. They have been around since 97 and have 7 cds to their credit with tons of accolades all over the world for their music but they havn’t quite piqued the american market quite yet. With their new singer Anette Olzen on board and a new cd that came out late 07 called “Dark Passion Play“,it looks like this band is on its way up over here. If the showing of over 900 people at the House of Blues in Vegas is any indication of whats to come, I am sure they will get even more known. Vegas is a very fickle and trendy market for music and the rockers are very stuck in the 80’s, so its hard for new metal bands like this to make their mark here, but looking at the crowd of kids that showed up to this show and the perma-grin smiles and the knowing the words to songs, it was better than I expected! This crowd knew this band. I am a newcomer to them and just within the new cd have I gotten into this diverse band. I had to ask what songs they were playing but it was ok, because I will know these songs soon too! I am listening to “Once” now and its a cd of gems that are incredible. This band is a talented bunch. Anette had hard shoes to fill after singer Tarja left the band and she seemed to fill them well on-stage tonight as the crowd screamed in approval. She had a tear in her eye at one point. She was very cute and bouncy for a metal band but her vocal abilities are a great mesh with this band and their other male singer Marco Hietala. He is a viking looking man with the voice of a warrior. I love this guys vocals. He also has a killer metal band called Tarot with a cd out called “Crows Fly Black“.

They started the show quickly with “Bye,Bye Beautiful” a song dedicated to Tarja and then flew into “Dark Chest of Wonders” from “Once”. I was really blown away by the showmanship of the guys in this band and Tuomas Holopainen, the keyboardist is just a phenom, pounding out the keys and sipping his wine. The man is HOT! He had a Edward Scissorhands doll on the front of his board which was amusing! They went on to play “The Siren” and one of my faves from “Dark Passion Play”, the hauntingly beautiful “Amaranth“. Emppu the guitarist who is somewhat short in stature,but huge in showmanship was all over the stage. I loved when he came over to our side of the stage and smiled and threw picks at us. 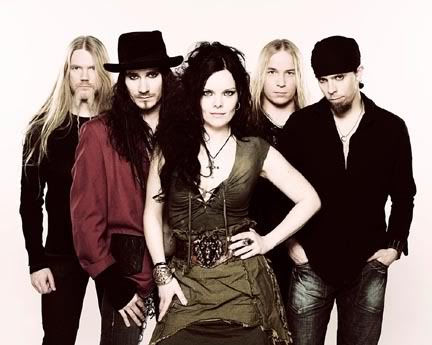 The guitarists Marco and Emppu came out to a dark stage and brought out their accoustics and played the beautiful almost celtic feeling song “The Islander” which was just awesome!! They then played “The Poet and the Pendulum” to a loudly screaming audience! It seemed to be a fave from “Once” also. That album was their breaking point for the world to know who they were in 04. Then there was “Dead to the World” ,”Sleeping Sun” and the egyptian themed “Sahara“…that song was just killer live!!! They did their Epic “Nemo” which was just mindblowing and left the stage for the encore. The crowd screamed NIGHTWISH over and over til the band came out and did three more encores which were “Higher then Hope” Wishmaster” and my fave song off “Once” called “I wish I had and Angel”, that song is just so fucking rockin that I went crazy for a minute jumping up and

down like a madwoman!! I was just so sad when they were done because bands like this just so rarley come to my town. I am so grateful that they did because they made my night!

I was fortunate to hang out after the show with a bunch of people at the Luxor til the wee hours of the morn. There was John,Toni, Marco, Jukka, Robin, John and Karin all from Nightwish and Sonic Sydicate and thier managers. Everyone was so nice and fun to chat with. I had a great time with my new finnish and swedish friends from across the world. What a nite this was for me!! I cant wait to see this wonderous band again next year!! Thanks to all that I met! 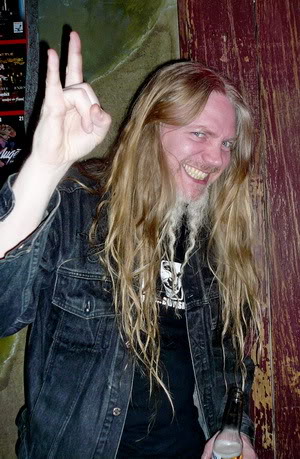 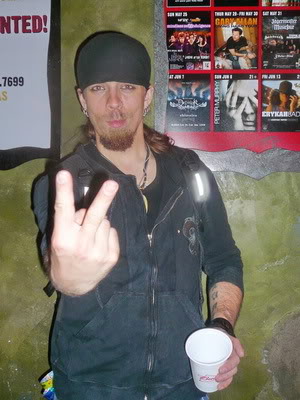 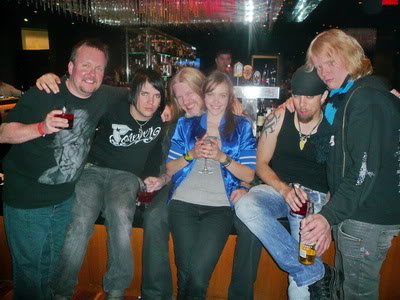